Vasilikos area and its history

Vasilikos is not only mentioned in songs from locals and writers but it is a prehistoric and Mycenaen settlement. The magic of the sandy beaches with the Autumn lilies that grow alone, the Spring flowers , the endless pine trees, the cypress trees, the olive groves the area of Doretes, Kalogeros, Vodina and Gerakas are places of an incredible landscape.

Mount Skopos and its history

The mountain with a history of 3.000 years is the ancient Elatos and now has the newer name Skopos. This mountain is of particular physical beauty and appeal, sleepless guard and companion of the seaside nearby areas. It stands there with its unique shape in the mid of the action around it. A sacred place dedicated to Artemis the Goddess  of hunting. Many sacred churches dedicated to the Goddess were standing among the trees at all the sides of the hills. 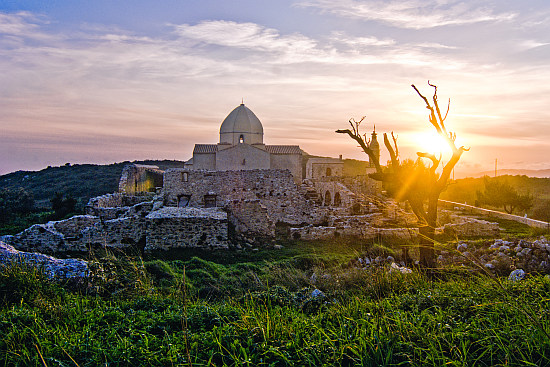 After the worship of Artemis, the mountain was dedicated to Holy Virgin Mary. It is not really known when the church which stands at the very top of the hill was built. There was also a monastery of Panagia Skopiotisa. After the earthquake in 1521, the church was destroyed and later Nicholas  Logothetis  rebuilt it. When they were digging for the foundations of the new church  they found the ancient church of Artemis, some of those old columns of the ancient church were put at the temple. Later the area with the church and monastery was owned by the bishop of  Korinth Anthimos who lived there as a monk. Many years later the church and the area around it was owned again by the Logothetis family. The old icon of  Panagia Skopiotissa with a lot of offerings were taken away from Zakynthos. Many historical treasures of the church are these days in some churches in Venice.

After the earthquake of 1953, the church was restored with the help of the Member of Parliament Dionisios  Romas, next to the church there was a Tower from where the monks could spot invaders, now it is destroyed and only the base of it can be seen today.